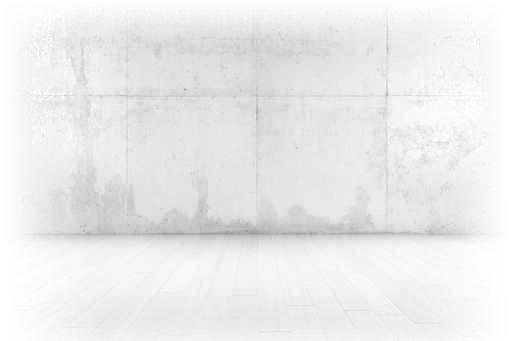 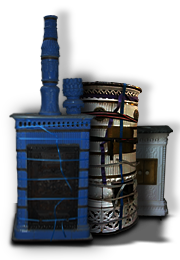 A bit of history

Ceramics was the first "fire art" to appear, well before the metallurgy and glass working.

Terra cotta covers the set of objects, made from clay, who underwent irreversible physical-chemical transformation during a cooking at high temperatures.

It currently remains the material most prevalent in the arts of the table or the construction (bricks, tiles).
Faience is a terracotta clay ; This is one of the most common and the most ancient techniques used in ceramic. 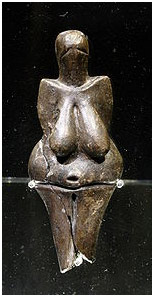 The Venus of Dolní Věstonice

The Venus of Dolní Věstonice (Czechoslovakia) is one of the oldest testimonies of creating ceramic : This Palaeolithic Venus is a female representation from 29 to 25000 years BC.
Most terracotta earthenware use a clay of hue ocre3, mixture of potash, sand, feldspar and clay. It is one of the oldest mixtures used in ceramics.
Their email to Tin-covered, white or coloured, Terra cotta parts become earthenware.
Faience pottery can be technically as fine as the porcelain, Although it is not translucent and can more easily be wiped off. From the beginning of the 17th century and the development of maritime trade with the far East, faience was widely used to imitate Chinese porcelain, whose composition remained ignored. This was the case, among others, for the earthenware of Delft, who was immediately exported and imitated all over Europe.

The discovery of faience, in the 9th century and its dissemination in the West during the Renaissance represented a major technical advance : for the first time, the Potter will relieve stovepipe or incised decorations to delimit the colors. Especially, He could use the white background to run a real painting 2 and reproduce elaborate decorations, likely to be inspired by great artists. On the white and porous glaze, the colours could be asked of the brush, safe to unburden himself on the varnish. It was strongly, What was not possible with the single dark clay background.

A stove is a rudimentary heater, directly heating the location. It is a system "enclosed combustion.. It is rudimentary in the direction where it does not circuitcaloporteur (thermal offset circuit). This point distinguishes it from a boiler. It spread its warmth directly (by convection and radiation).
Their relevance has appeared in furnaces at fuels solid grace :
1. the amount of combustion air setting (oxidizer): The regularity of the power and the ability to vary it precisely ;
2. to yield fuel savings, While Burns open fireplace have many losses by excess air (80 % of the air is nitrogen that does not occur in the combustion) ;
3. Finally, Thanks to the increase in combustion temperatures which reduces the unburned (particles and gases).
The ancient know-how of ceramics cooking, of steel, as much as those of the kitchen cooking did emerge the techniques related to the stoves. 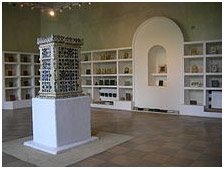 Skillet by mass and Kachelofe.

They are not rudimentary.
Indeed apart from the most common, they are so massive that the heat from their environment remains very constant and diffuses slowly into space.
We can distinguish two subfamilies : the “inertia stoves” and the “monumental mass stoves”. In the latter, the large mass needs to be anticipated for the construction of the building. Some of these really typical stoves are fitted with bench seats on one of their faces, heated by the fireplace. You can sit there, and even more rarely sleeping there. A niche is often made, used to heat boilers or cherry bags, that the inhabitants of the House were in their beds. They were also used to dry fruits. In the farms and modest dwellings, the oven or cooking stove, installed in the kitchen, also heated the adjacent bench to the stove in the beautiful room called the 'Stube '..
This efficient system in fuel is called 'Kunscht' North of the Alps (Northeast Switzerland, South of the Black Forest, South of Alsace), named "Holzsparkunst" or art to save wood.
Some stoves are beautiful artworks. In France the restaurateurs craftsmen of tiled stoves are called “poelier” or “Master poelier” 2. In France, we find a dozen of these craftsmen and they have almost all of a website that allows you to see some of these wonders.

The earthenware of the East

REPORTAGE TV: Jerome, one of the last French Stove Fitting !

For sale / A restore